The work of Catholic Relief Services in the Holy Land began in the 1940s and focused on assisting refugees displaced by the devastation of World War II. CRS established a program office in 1961 under an agreement with the Hashemite Kingdom of Jordan and in 1967, the Israeli government asked CRS to continue its presence. In October 1999, CRS was officially registered with the Palestinian National Authority's Ministry of Interior to carry on with our work in the West Bank and Gaza. Today, our work in the West Bank, Gaza and Jerusalem focuses on humanitarian assistance, food security, youth empowerment and leadership, civic participation and peace building. 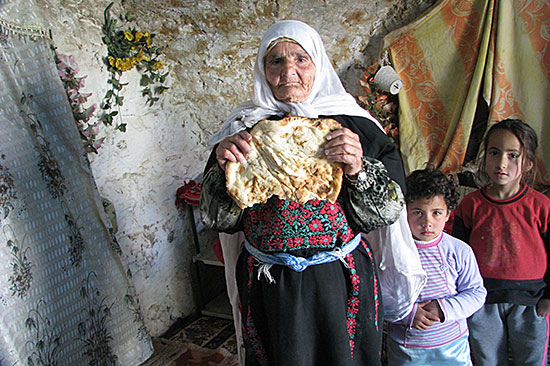 In the West Bank, CRS distributes staple foods to impoverished Palestinians and provides funding for educational programs for youth. Photo by Laura Sheahen/CRS
The long-standing conflict in the Holy Land between Israelis and Palestinians has cost countless lives, destroyed homes and property, displaced millions of people and has reverberated around the world. CRS believes that the United States must provide immediate, persistent and determined diplomatic leadership toward the clear goal of a final status agreement between Israelis and Palestinians, establishing a viable Palestinian state alongside a secure Israel. CRS contributes to this effort by helping to lay the foundations of a politically and economically stable Palestine and by encouraging dialogue and non-violent conflict resolution. Our programs focus on strengthening civil society, expanding economic opportunities, facilitating peaceful conflict resolution, empowering women and fostering the development of a government responsive to the needs of its people.

Peace Process: CRS strongly supports efforts to bring peace and stability to the region through the U.S. Conference of Catholic Bishops (USCCB) Campaign for Peace in the Holy Land that promotes understanding and support for a just and lasting resolution of the Israeli-Palestinian conflict. A two-state solution is supported by majorities of both Israelis and Palestinians as the best way to end this tragic conflict.

We are encouraged by recent U.S. efforts to restart direct negotiations between Israel and the Palestinian Authority. We believe such talks should yield a commitment and specific actions to hold all parties accountable. Immediate concerns include assuring effective access to and reconstruction in Gaza, as well as an effective freeze on all settlement activity in the West Bank including East Jerusalem. All final status questions including borders and security arrangements, settlements, refugees and the status of Jerusalem can only be settled by negotiation between the Israelis and Palestinians, and unilateral action by the United States or other countries on these points is generally harmful to prospects of peace.

U.S. Funding of Humanitarian and Development Programs: The United States has been a generous supporter of humanitarian and development programs in the region. These programs have helped to bring hope and opportunity to some of the poorest and most vulnerable in the region, and play a key role in promoting long-term stability. However, Congress, in recent years, has threatened to withhold funding for these programs in response to Palestinian Authority activities at the United Nations. CRS believes funding of these programs should not be tied to peaceful actions the Palestinian Authority takes at United Nations, or in any other multilateral body. There is significant value in these programs and the aid provided to the poor should not be used as a pawn in geopolitical disagreements.