Approximately 800 million people worldwide face hunger on a daily basis. People facing chronic hunger do not have access to enough food to maintain healthy and productive lives. Often times it is the most vulnerable in a community who suffer the greatest from hunger—women, smallholder farmers, the elderly and children. Studies have shown that malnutrition can have an especially profound and lasting negative impact on the physical and cognitive development of young children. Those battling hunger have a lower immune response, and thus common place ailments become life threatening diseases. Overall, communities that suffer from chronic hunger are less productive and less stable. 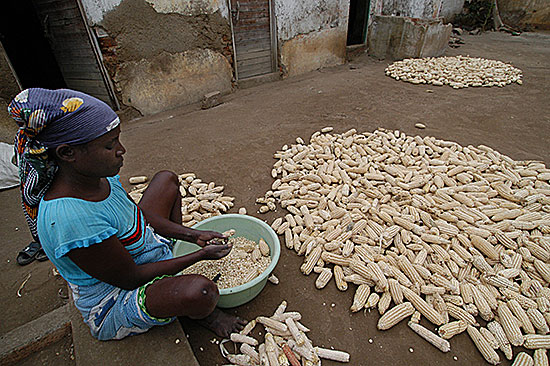 In addition to the people who have an ongoing and protracted struggle with hunger, millions more are forced into hunger due to sudden and severe disruptions of their normal lives. This can take the form of droughts or floods that wipe out farm land and leave poor families with nothing. This could also be a result of armed conflict, which keeps farmers from their fields or city dwellers from their jobs. Whatever the cause, the result is that people are forced into a situation where they can no longer earn the livelihood they once could and require emergency food supplies just to survive.

Food for Peace Development Programs: Food for Peace funding is divided into two streams: 1) emergency funding which assists people facing sudden onset disasters, such as conflict or weather events that leave them in immediate need of food, and 2) development funding which helps poor communities address their broad range of need to improve their foot security, including growing more food, improving their nutrition status and improving livelihoods. CRS believes that funding should be dedicated for both emergency and development purposes, and that both are critical to battling hunger around the world. However, there have been efforts in Congress in recent years to shift more Food for Peace to emergencies at the expense of development programs. Already the vast majority of Food for Peace funding is dedicated to emergency programs, and further decreases in development program funding will only undermine the long-term food security of the poor. Food for Peace development programs help farmers with small plots (less than two hectares) grow more food by introducing better seed varieties and improved farming techniques, improving the nutrition of poor families—especially for children in the first 1,000 days of life—and helping the poor diversify their livelihoods so that they can be more resilient to future shocks. As such, CRS supports an authorization of at least $450 million per year for Food for Peace development programs, and yearly appropriations that meet this authorized level.

Food Aid Reform: Recently, the Administration and some in Congress have proposed reform of Food for Peace. CRS supports this reform effort, and we believe reforms should be authorized and program funds should continue to be directed to the most needy.

As an organization that implements Food for Peace programs, CRS knows firsthand that programs need more than just food to reach our objectives. There are costs involved in helping poor farmers grow more food, like seeds, tools and trainers. To pay for these costs, CRS has to sell some of the U.S. food it receives in foreign markets. This practice is referred to as monetization. While our experience with monetization varies by country and year, in most instances we receive less from these sales than what it costs to buy and transport this food in the first place. Given this inefficiency, CRS supports eliminating the need to monetize U.S. food commodities and using more Food for Peace resources to directly fund the costs of development programs. To be clear though, CRS continues to see a need for U.S. food products in development programs, especially to support nutrition and food-for-work objectives.

Additionally, in cases of emergency, CRS supports using Food for Peace resources to buy locally available food. Our experience shows that buying food locally can be faster, cheaper and safer than shipping food from the United States. CRS does not view buying locally as a panacea, and there will continue to be instances where emergency needs can only be fulfilled by shipping food from the United States.