Based in Washington, D.C.

As CRS' global public health expert, Suzanne works to support the organization's health-related projects, including those related to malaria. In 2014, she was an integral part of CRS' response to the Ebola outbreak in West Africa. 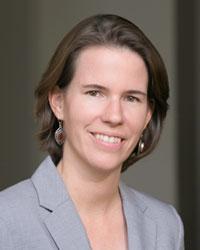 Based in Washington, D.C., Suzanne Van Hulle is a global public health expert and malaria specialist who has been deployed to the frontlines of international public health crises, such as the West Africa Ebola outbreak of 2014.

A native of Switzerland, Suzanne joined Catholic Relief Services (CRS) in 2007 with the Benin country program as a graduate health intern. A year later, she moved to Sierra Leone where she spent the next three years managing health and nutrition programming. From there, Suzanne moved to Senegal to join the agency’s West Africa regional office, where she supported 13 countries in the nutrition and global health sectors, including providing support to projects related to malaria and tuberculosis.

In late 2014, Suzanne moved to Baltimore to provide global strategic guidance to CRS programs in malaria endemic countries. As part of that effort, she led a multi-country program to introduce and scale up the use of the antimalarial treatment Seasonal Malaria Chemoprevention, which is given to children during the rainy season to prevent infection.

That same year, Suzanne was deployed to West Africa to support CRS efforts to curtail the Ebola epidemic.

Prior to joining CRS, Suzanne worked in the private sector and then with the Open Society Institute in New York. She also spent two years in India, where she was part of a local response to the 2004 tsunami, and later worked on HIV; drought mitigation; and non-communicable diseases programs in rural and urban areas.