Based in Kabul, Afghanistan

Based in Afghanistan, Anne leads a team of nearly 400 staff members on emergency response, education, agriculture, and hunger programming. 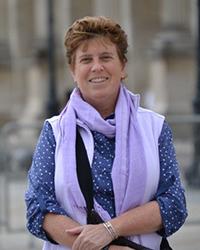 As country representative for CRS Afghanistan, Anne Bousquet oversees a wide variety of programming, including emergency response, education, and agriculture. Anne has led her team of nearly 400 staff members through several turbulent times in the country, including the COVID-19 pandemic, the August 2021 Taliban takeover, and the current hunger crisis.

For nearly 30 years, Anne has worked for CRS in a variety of roles and countries, including Cameroon, Angola, Ethiopia, Sri Lanka, Guatemala, and Nicaragua. During her time with CRS, Anne has worked through numerous emergency situations, including several droughts, tsunamis, and political upheaval.

Prior to joining CRS, Anne worked as a U.S. Peace Corps volunteer in Botswana, where she worked with small-scale farmers. She also established the first Peace Corps program in Equatorial Guinea, where she lived and worked for two years.