Holly Cantuba is the Community Engagement Manager for the Southeast Regional Office covering Alabama, Tennessee, and Kentucky. Holly joined CRS in 2011 as an International Development Fellow in Guatemala. She led food security projects in Bangladesh for two years, managed an integrated shelter, WASH, and disaster risk reduction project to support survivors of Typhoon Haiyan in urban Tacloban, Philippines, for two years, and was Head of Programs and Country Representative in Laos for a total of four years.

Before joining CRS, from 2009-2011, Holly was the Director of the Institute for Latin American Concern at Creighton University for two and a half years where she oversaw surgical mission trips; medical, dental, pharmacy, nursing, and undergraduate student service trips; and high school service trips to the Dominican Republic.

Holly holds a Masters in Business Administration and a Masters in Social Work from Washington University in St. Louis (2009) and a Bachelor of Arts in Justice and Society from Creighton University (2003). Holly lives in Huntsville, Alabama. 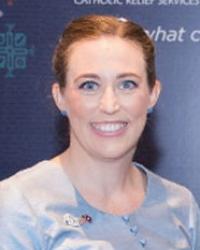